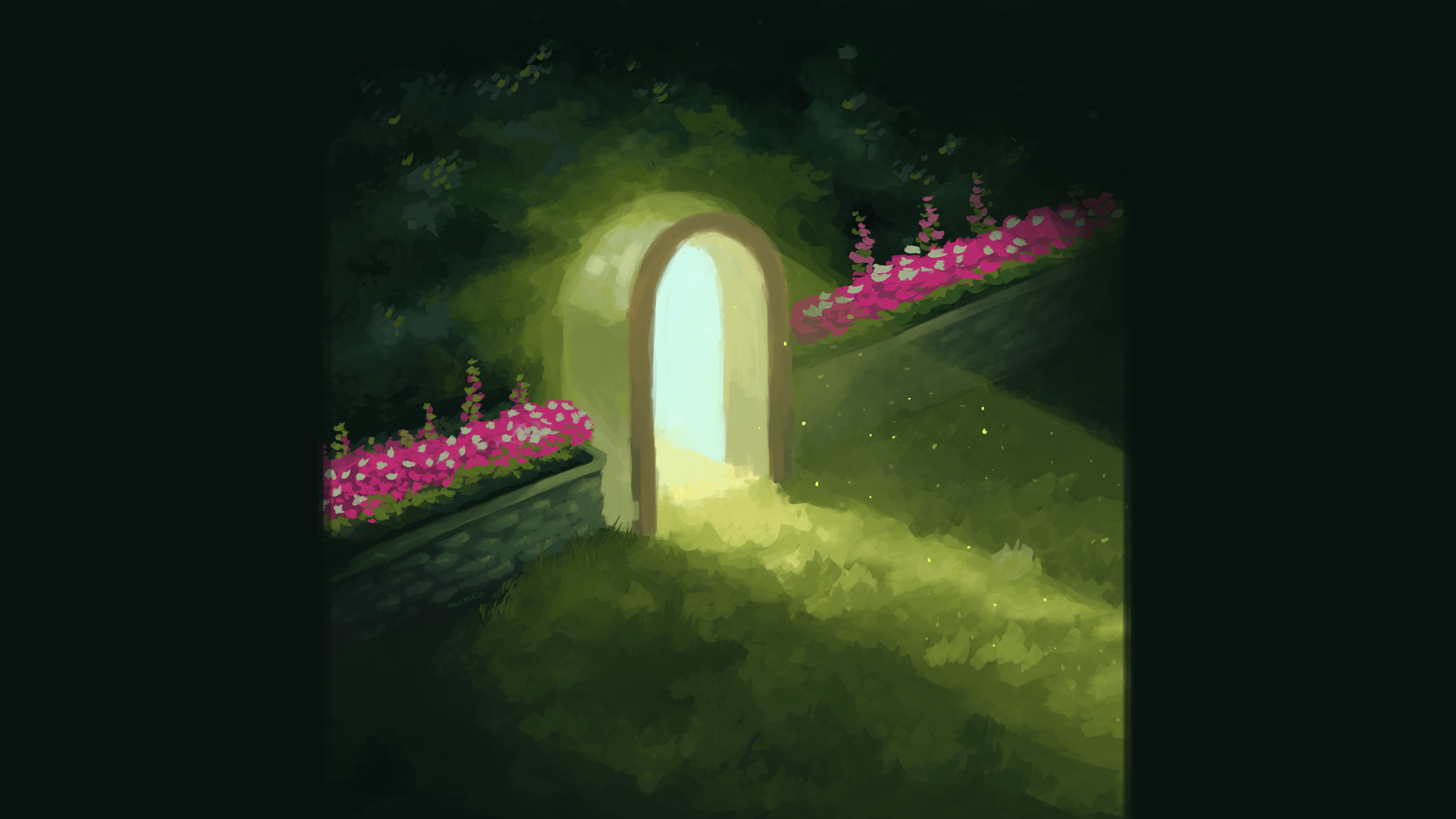 The scenario for Secret Tea Garden is you control an avatar who must brew and deliver Tea to randomly generated customers. The concept of the game was inspired by the fact i'm an avid Tea Drinker. The process of making Tea is second nature to me, so i wanted to make a game that turned that into a fun experience.

This game was made for the LowRezJam, which meant i had to make a game in a small 64x64 pixel screen size. I had around 2 weeks to work on the game, and i wanted to make something fun with a unique premise. To get to that point required some trial and error and unconventional tricks. 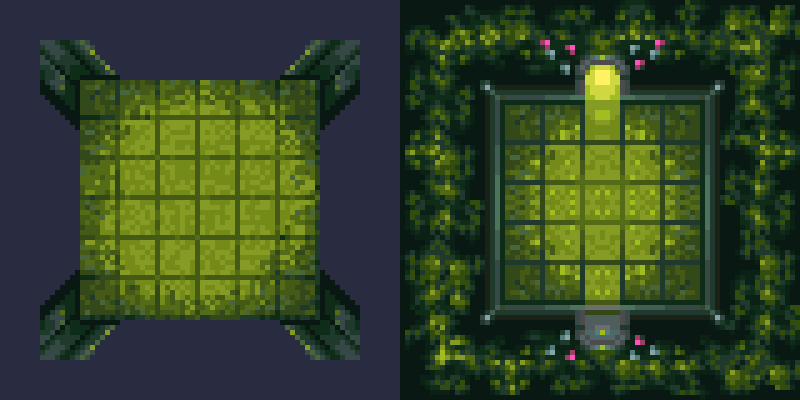 It was late-July and the Jam wouldn't start until August 1st, so before starting work on game code, i figured i'd do some planning and early pixel art. I made a map filled with 8x8 pixel tiles. I chose that size as it meant i could fit plenty of spaces on screen, while showing enough detail.

In this screenshot you can see a comparison with the early draft to the final design. Early on i was envisioning an indoor garden that took place in a tower. You would have gone up an elevator after each level. This was changed to a more traditional garden as i felt that made more sense. 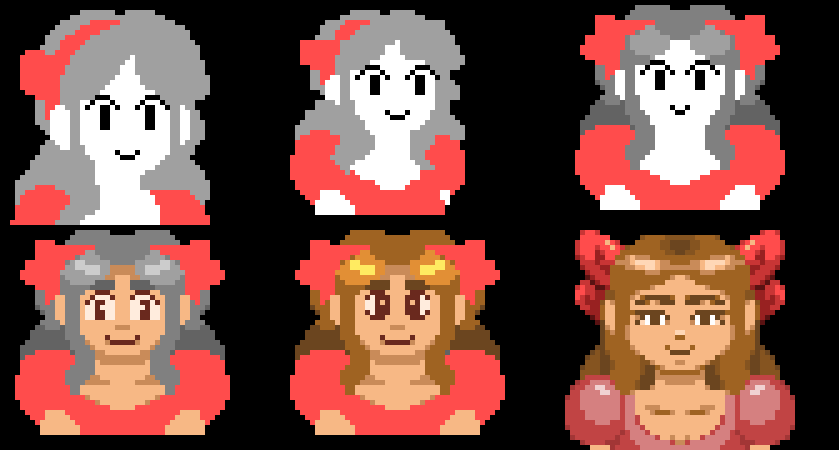 I came up with an idea on how to do character customisation. I felt the customers you served in game should each have a unique appearance, with a portrait that fills up full screen along with a dialogue box. In order to make a customizable character, first i needed to make a default appearance. Early on the designs were minimal, as time went on the designs evolved into something more detailed. 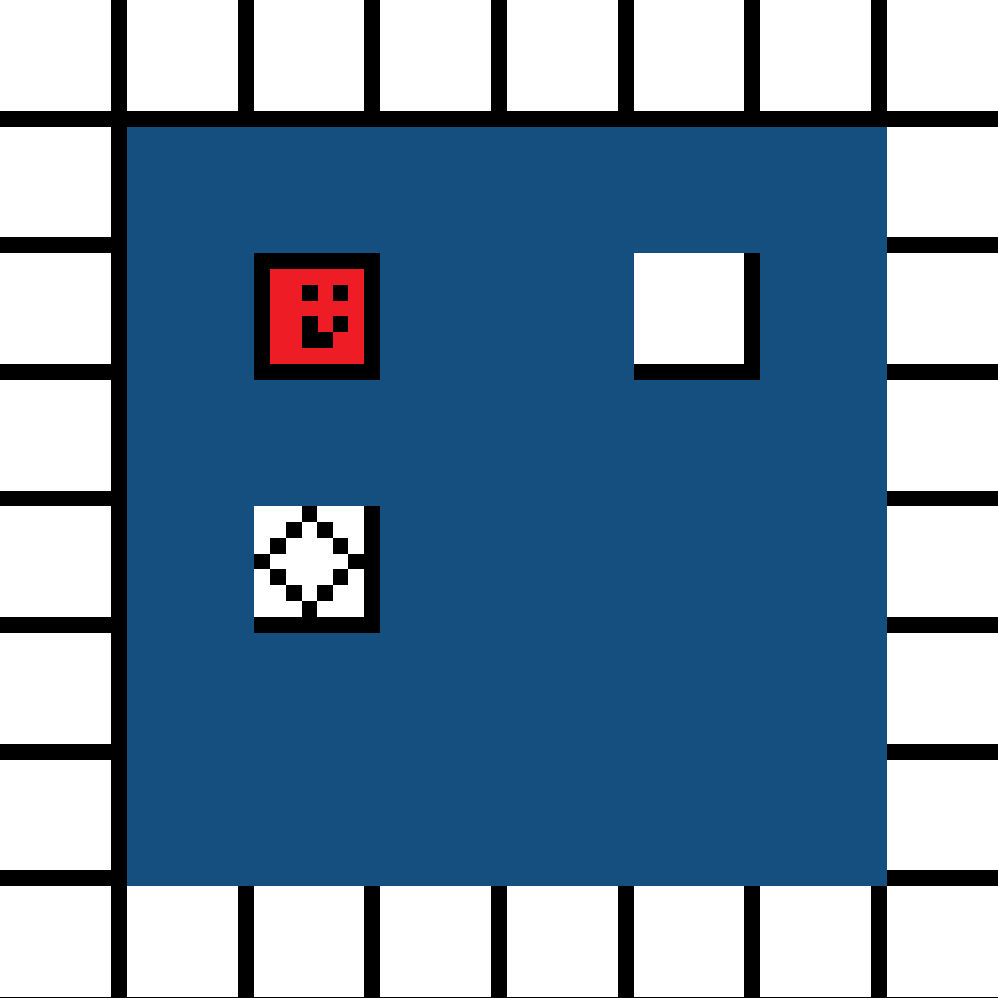 When August 1st rolled around, the two week deadline was on it's way and it was time to start coding. Before importing any of the graphics, i did a test run to see if i could get the movement to work. I wanted the game to be designed in a similar fashion to classic tile based puzzle games, where you'd only move one square at a time. I wanted to take this approach as it made movement clear, and made sense for such a small screen resolution. 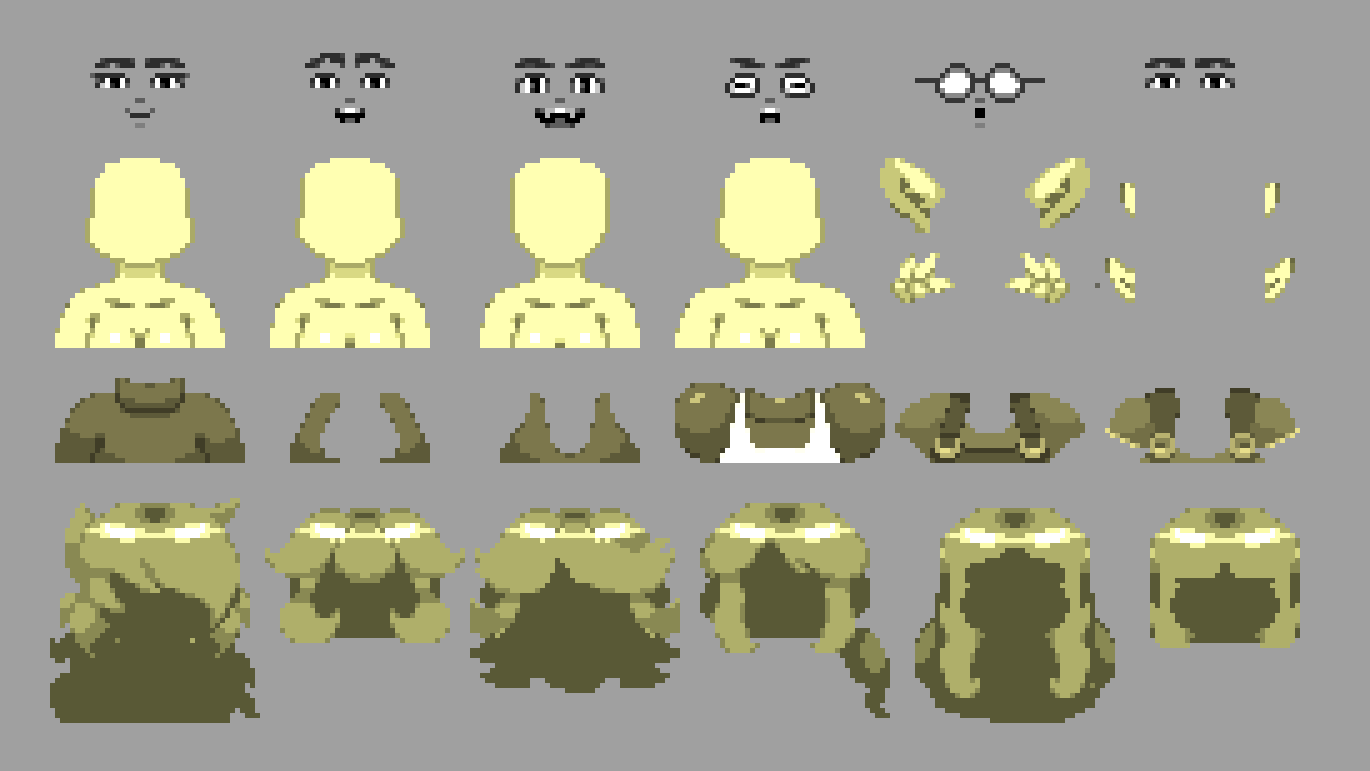 I created a default character portrait, now it was time to give it customizable features. Many variations of the face, hair, body, clothes and accessories were designed. The way it was pulled off in-game was the separate layers would be aligned together to create one image. And each element was given it's own colour code.

On paper that sounds simple, but it took a lot of work to look and perform well. The most difficult element was making the colours look right, as everything was very grey at first. So a yellow tint was added to all the elements. 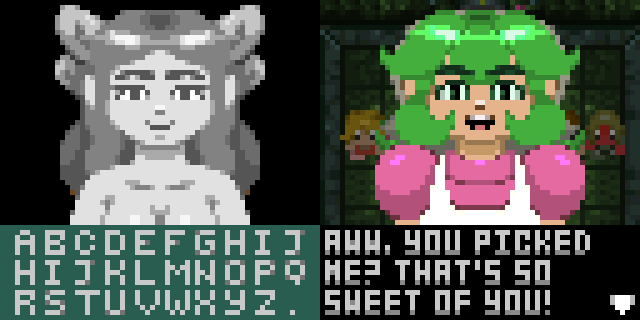 While designing the default character portrait, i was keeping an eye on how well they would fit on the screen with the text box. Considering the low 64x64 pixel resolution, i had to pick my heights carefully. After a lot of tweaking i managed to make a perfect balance of text and portrait.

The font was initially imported from my previous project, Fragment: Extended Edition. It went through several tweaks to get to it's final form. A lot of consideration was made to make the text readable. Letters were made thinner to fit more words on screen, and a line of shading was added to give visual separation of each row. 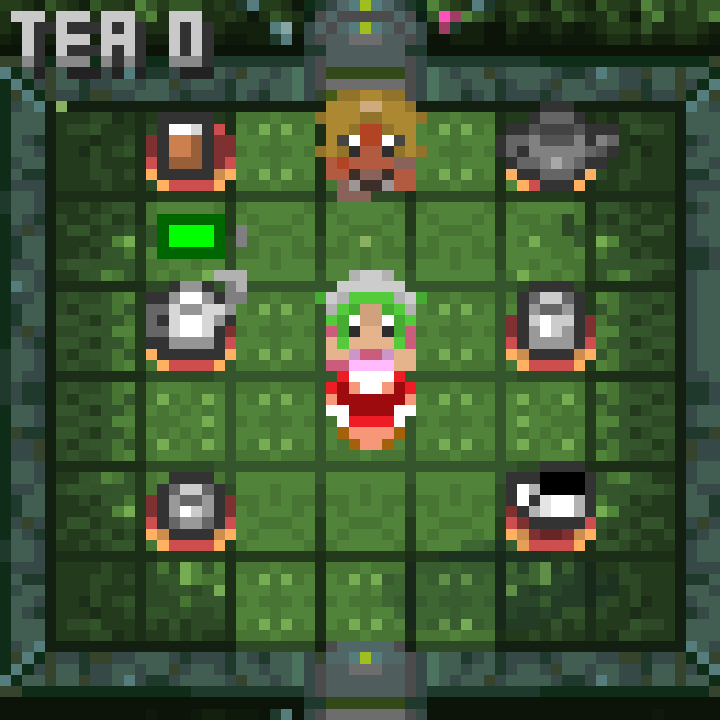 I was midway through development and starting to have something that was playable. I had a player character with collision, the ability to pick up items, a customer to talk to, dialogue boxes, and a character portrait that reflected who you were talking to. Now it needed a goal; making tea!

I debated how complex making tea should be. I considered having it be just as time consuming as the real thing, but i realised that wouldn't have made for a fun experience. So steps were cut and processes were sped up.  The kettle takes 5 seconds, which would be fast in real life but is just long enough in a video game.

The tea making experience was made more user friendly: You're given a quick walk through on how tea is made in the beginning of the game, and an item description was added so you'd know what you were picking up. 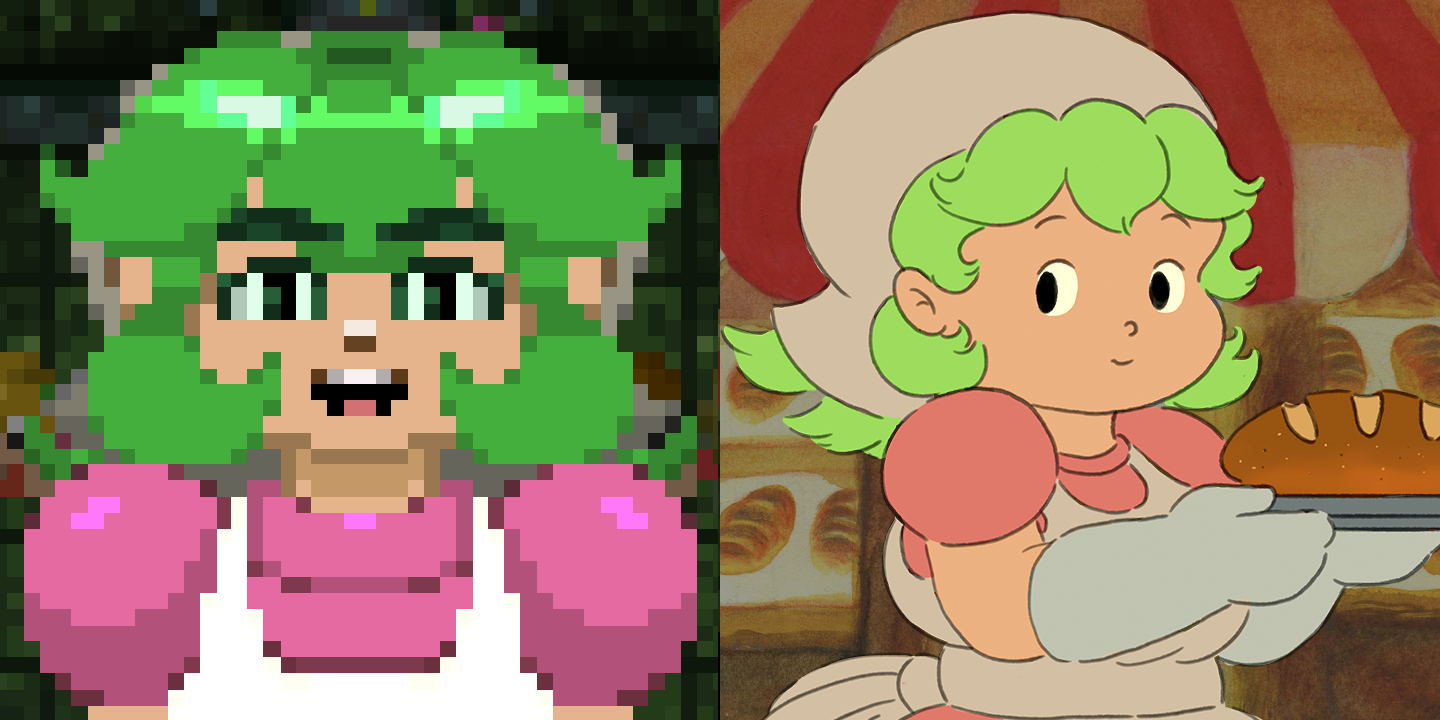 The game would feature a familiar face; Anita from my animated short film, Spirit Bakery. I included several cameos in Secret Tea Garden, all of them were characters from my previous works (animated shorts and games). Anita was the star of the show because of her waiter aesthetic. In this game she was given character expansion through her dialogue.

She serves as your guide early on, teaching you how to make tea and customise your avatar.  I wanted players to feel welcomed through her dialogue. For instance; She'll mention that you can change your appearance but your spirit will stay intact. I felt that made her seem considerate. And when you get pick her as your avatar she reacts with joy. I felt she was the perfect pick for this game, and was happy to have brought her back.

There are unlimited possibilities when it comes to the customer generation. You'll only ever meet a customer once and they're gone once you leave the room.  Customers also talk to you differently depending on their mood. They'd either greet you with joy, moodiness or sass.  Some may want Green Tea or Regular Tea, with or without sugar. Elements like these make delivering tea to your customers a more personal experience.

If you've played the game you may wonder about the strange Tea combinations at times, some customers ask for Green Tea with milk. While nothing is stopping you from making such a brew in real life, I felt it was funny so i left it in!

I initially had it so you could only change your avatar in the first room, but as the deadline drew closer i became attached to the idea of cloning your look from the people you meet. So an extra line of dialogue was added, where after delivering tea, you're given the option to copy that customer's look. 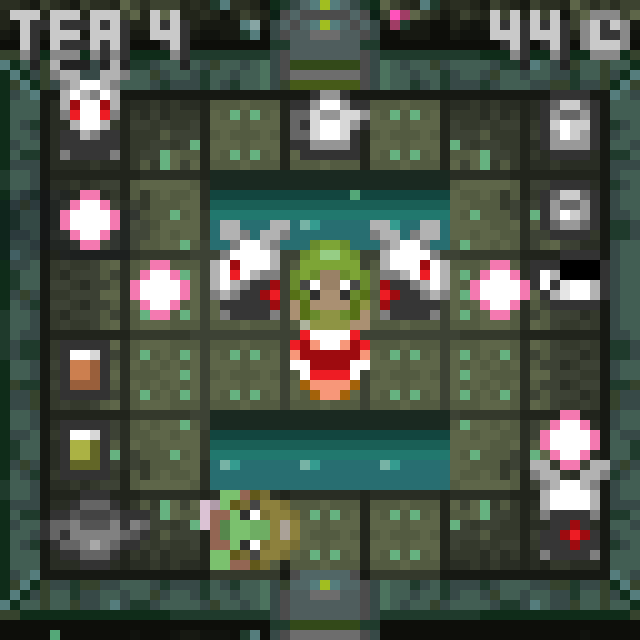 The last major element of the game i worked on was the level design. Level generation used an interesting technique where every stage takes place in the same field, the loading screen just cleans out the obstacles and loads in the new ones. The colours of the grass changes depending on the customer's colour palette, and the water has a hint the player's colour palette.

Originally levels were going to be randomly ordered, but time was starting to run out at this point.  4 level types were made and you'd cycle through them. To make things more varied, items and objects would sometimes change location and enemy bullets would travel faster the further you got.

I did make the levels easier closer to the deadline. Play-testers struggled with movable push blocks so those were cut entirely. When you carry an item it destroys any bullets you walk into. The collision was made far more forgiving as people tended to give up upon getting hit. 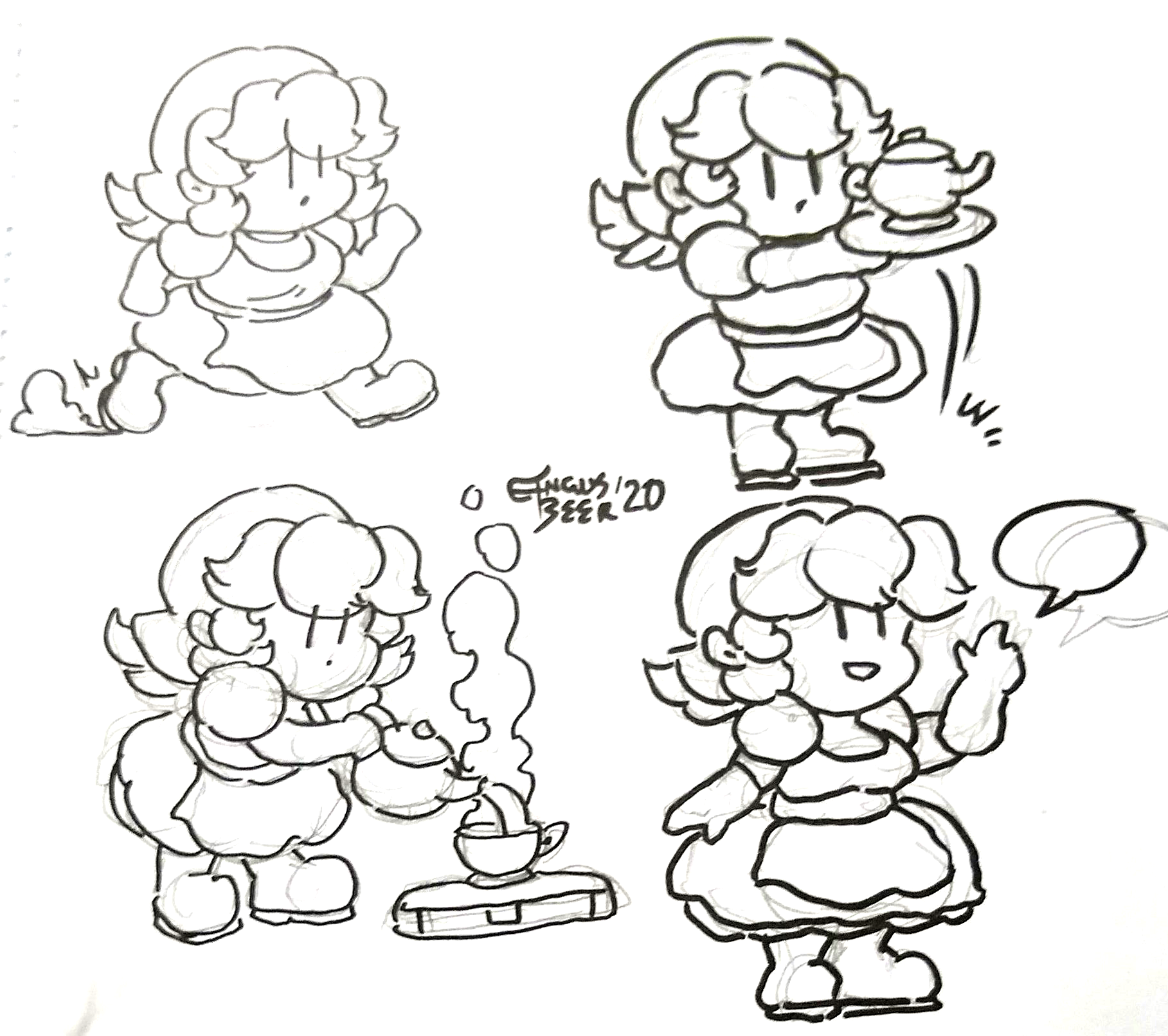 The sound effects were done by myself, i have a personal sound library that I've built up over the years. It's made from public domain sounds that i mix and edit together to turn into new sound effects. Despite the fact most of my games go for a pixel art look, i prefer the audio to sound more natural.

The music was done by my long-time composer William Burroughs. Much like the sound design i wanted a track that sounded organic. I felt the final track he'd composed managed to balance both a relaxing tone while also feeling intense against the clock. 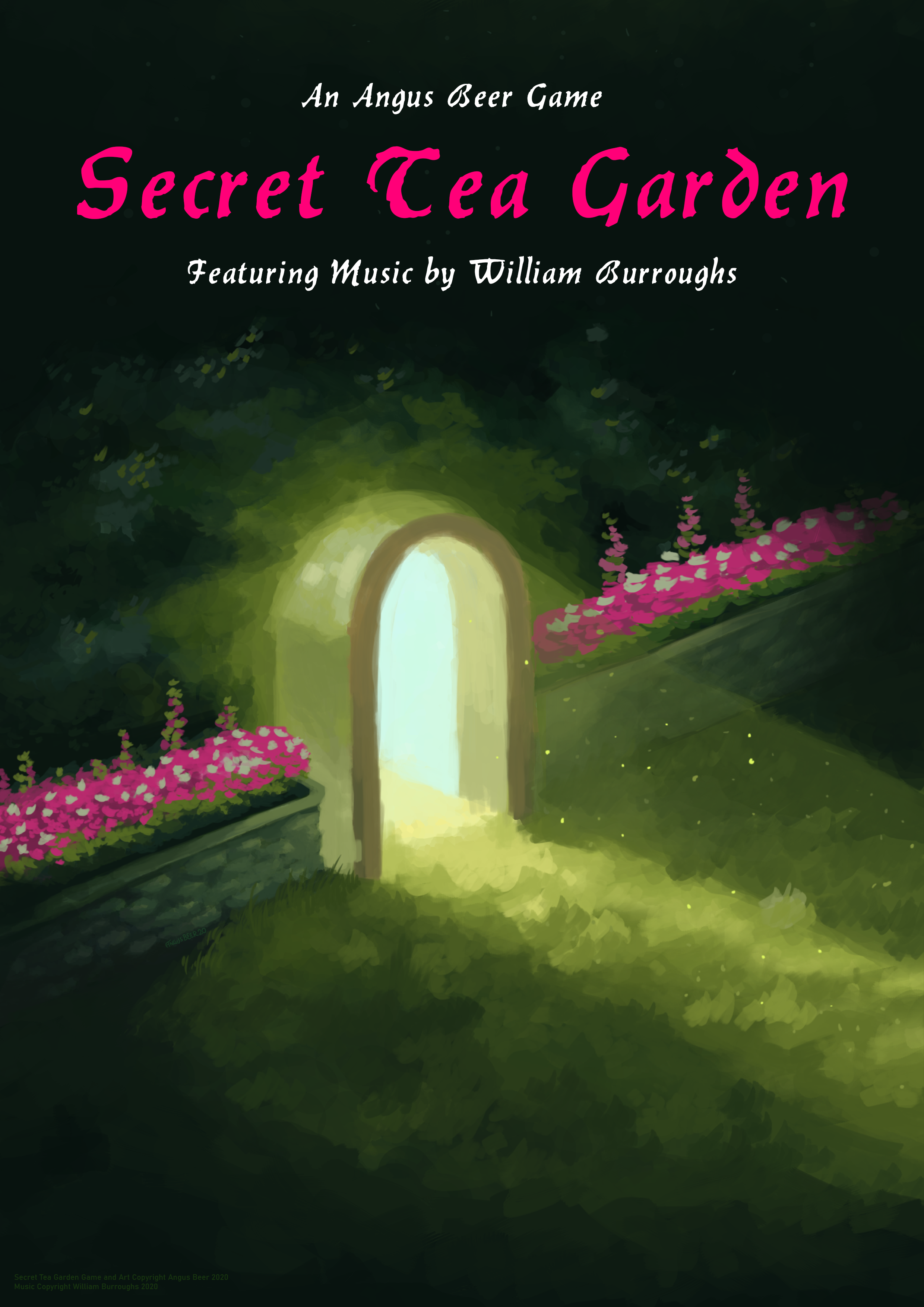 When it came close to the release, i was thinking on how to present the game. I initially came up with a poster that showed a painted look of the garden and door. I wanted it to have an element of wonder: you don't see anyone around, just the door and a beam of sunlight.

Although i loved designing this poster, it wasn't used for the game's release. I wanted to showcase the pixel art of the game, as well as show Anita as the main star. So i decided in this very Devlog to introduce this as the alternative poster for the game!

The final thumbnail for the game also doubled as the game's title screen. I noticed a lot of the popular Jam games featured GIF thumbnails, so i wanted to showcase my animation skills here. As well as showcase the game's main character and showing someone drink their tea!

Overall i'm very happy with how this game came out. And so were the people who played it, as it came at #9 Overall in the LowRezJam Results! And even #5 for the Audio! I felt this game made a good balance of a unique premise and fun game play. I will be using some of the techniques learnt making this game in my future projects!