I'm happy to announce that Sunset Witch will finally return on October 17th 2020 with a Demo! This will feature the first stage of the game, and will mark the first time the game has been publicly playable! Many things have changed with the game since it was last seen, in this Devlog I'll be going over what the Demo will include, followed by the Development of the game so far.

Sunset Witch works at a local Botanic Garden. One day She hears an explosion and finds the Garden has been invaded by Demonic Rabbit Cultists. Equipped with Her Elemental Blade, you go on a journey to take down the Cult!

The game is a Bullet Hell Platformer, you'll travel through the Botanic Garden fighting Demonic Rabbit Cultists and avoiding swarms of Bullets. There are crates to slash open and hidden doors to unlock.

You're equipped with the Elemental Blade, capable of close ranged attacks and shooting bullets. The combat is dynamic while being easy-to-learn. 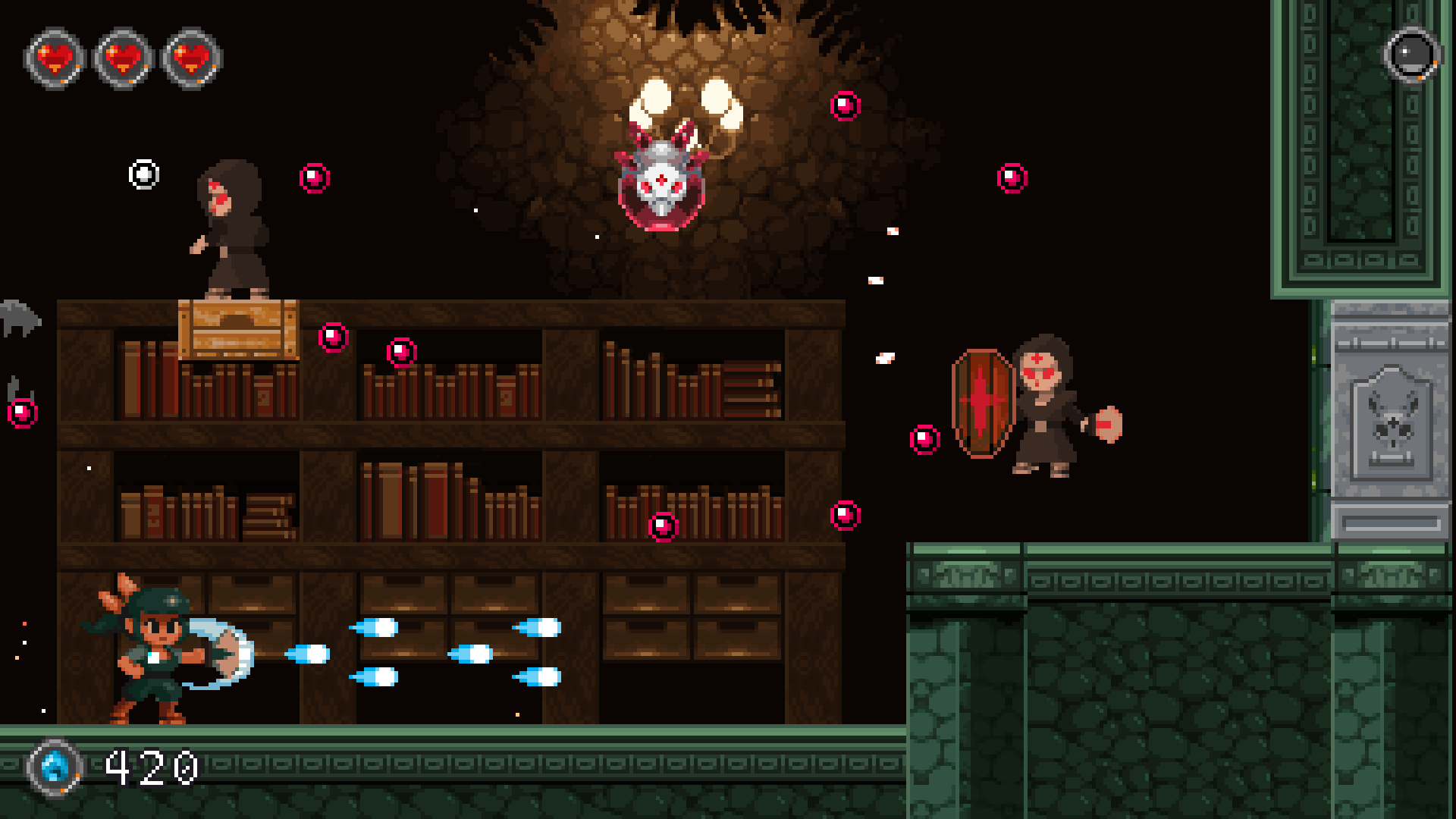 On your adventure you'll encounter many of the evil beings, though they look similar they all have different attributes. Some throw bombs, some carry shields, all fire bullets! 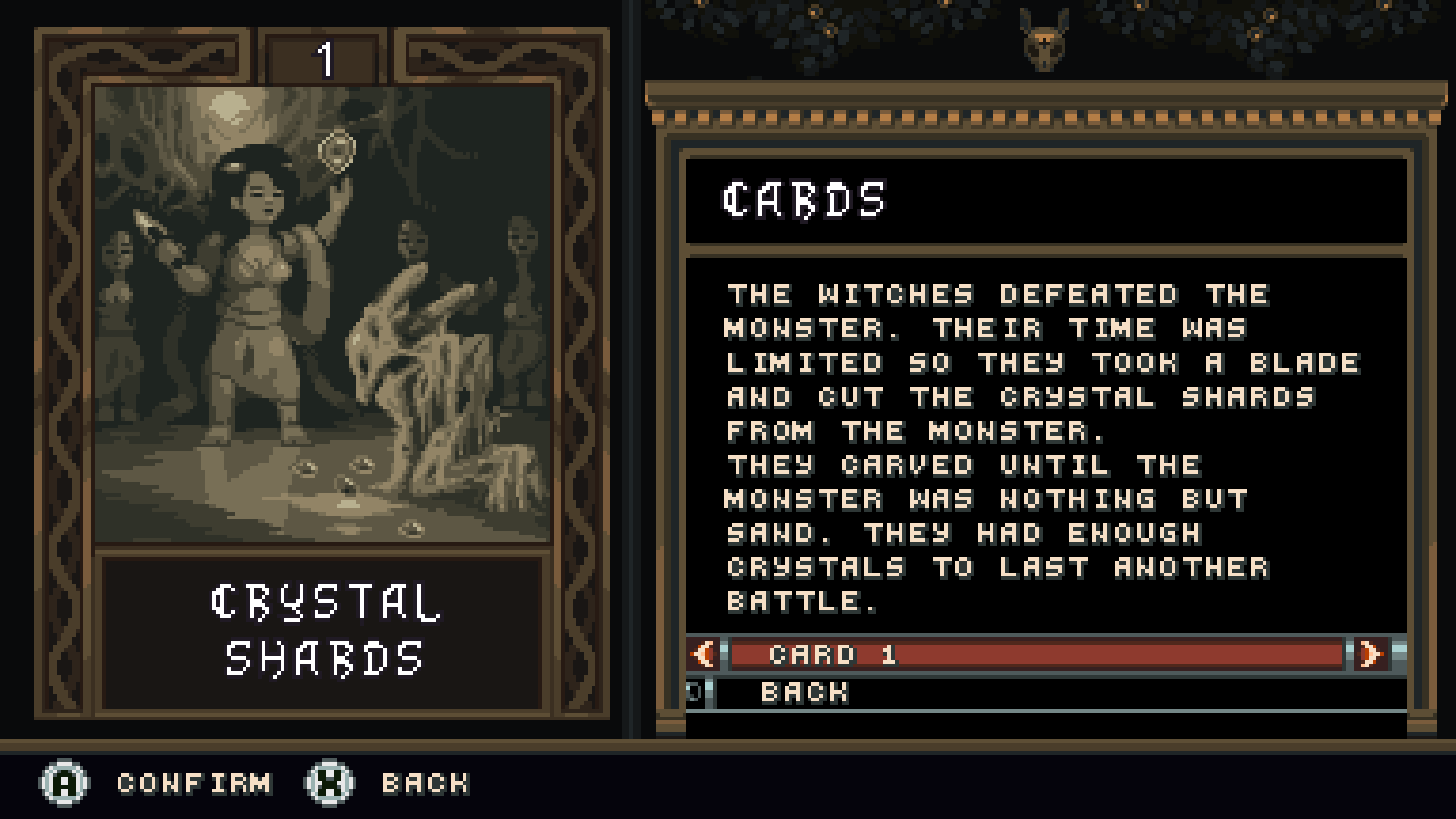 There are Cards hidden throughout the Stage which show an illustrated story. You'll learn about the Witches of the past and some gameplay tips. You can access the cards at any time in the Pause Menu. 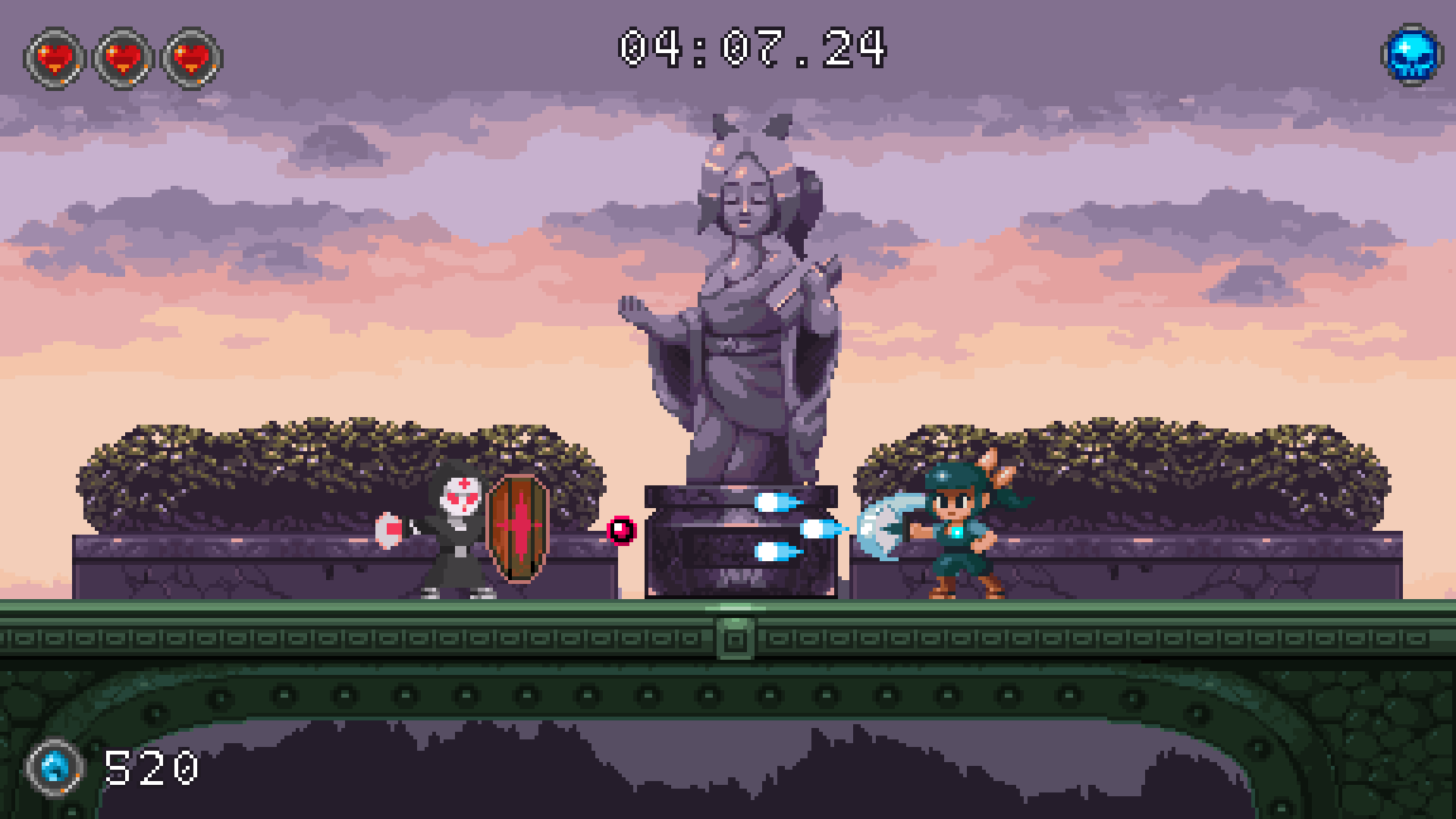 The game features endless amounts of pixel art and animations, in this Demo alone there are multiple Parallax Backgrounds with varying designs. The Demo features music by William Burroughs, which adapts throughout the stage to match the tone of the room! 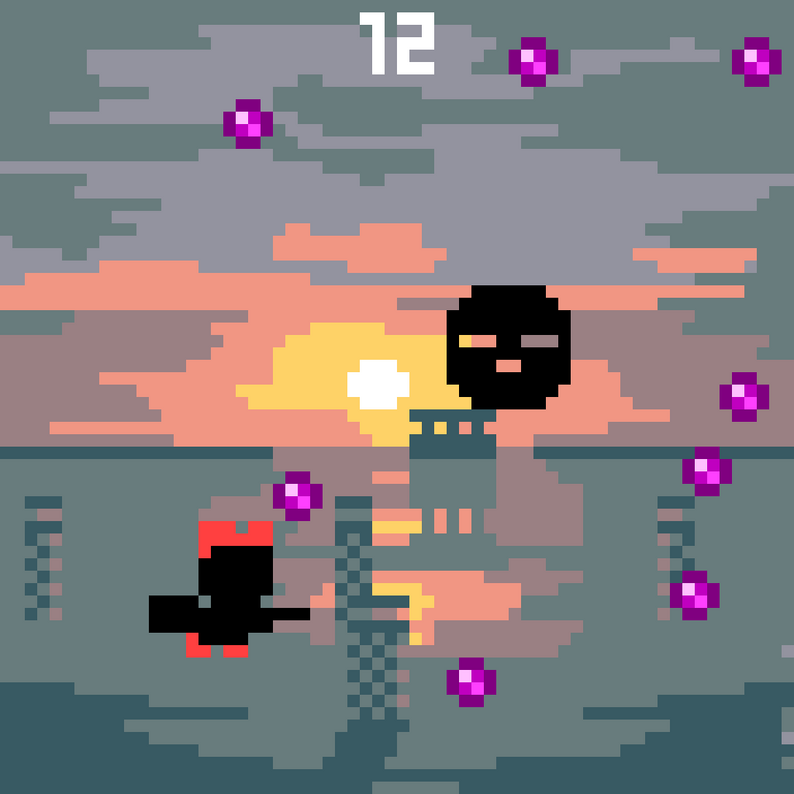 In 2017 I made a game for the Low Rez Game Jam called Sunset Witch Classic, a shoot 'em up game where you play as a Witch blasting an endless supply of enemies by the seaside. That game was made in around three weeks.

In 2018 I started work on a follow up, originally titled Sunset Witch X but now just called Sunset Witch. The original plan was for it to be a Summer project, it was going to be a shmup with multiple stages. However the scope and concepts had drastically changed over time.

Originally I did Monthly Devlog Videos from April 2018- January 2019, detailing what I was working on in that month of development. After the January video I quietly stopped sharing updates on the game. I felt making videos was taking time away from the game itself. I personally prefer to present things in a polished state, so I thought I'd continue work on the game at my own pace, updating only when there was significant news. 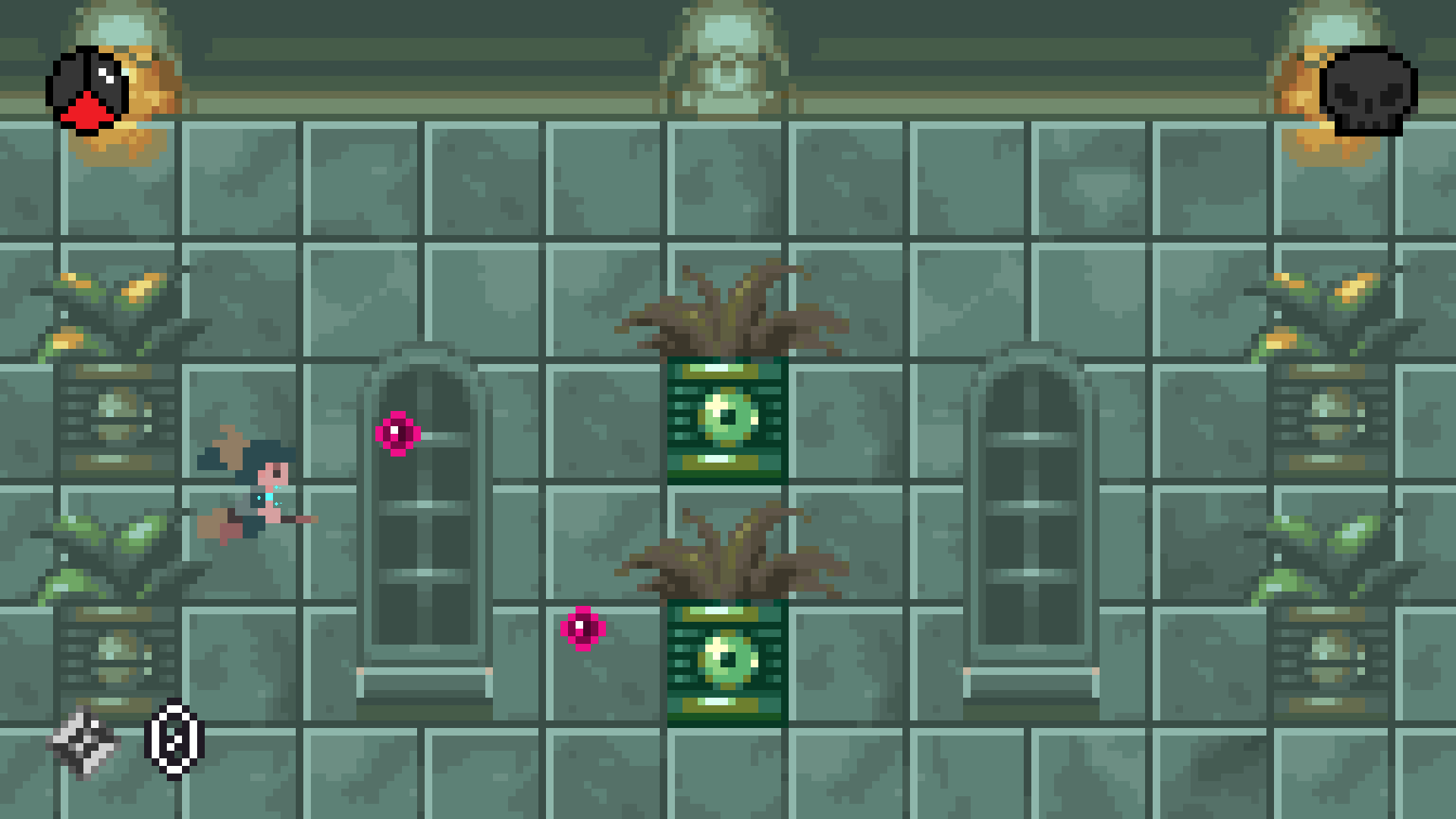 Behind the scenes everything was changing with the game. Feedback and personal thoughts were telling me the game wasn't working out the way I had hoped. Some of the issues included;

In September 2019 I decided to take a break from making the game itself. I was working on other projects, but in the meantime I was coming up with ideas on how to re-invent the game. At this point the game would switch between a flying shoot 'em up and a platformer; I found the platforming was more fun to work on so I decided to focus on that for the next major build. 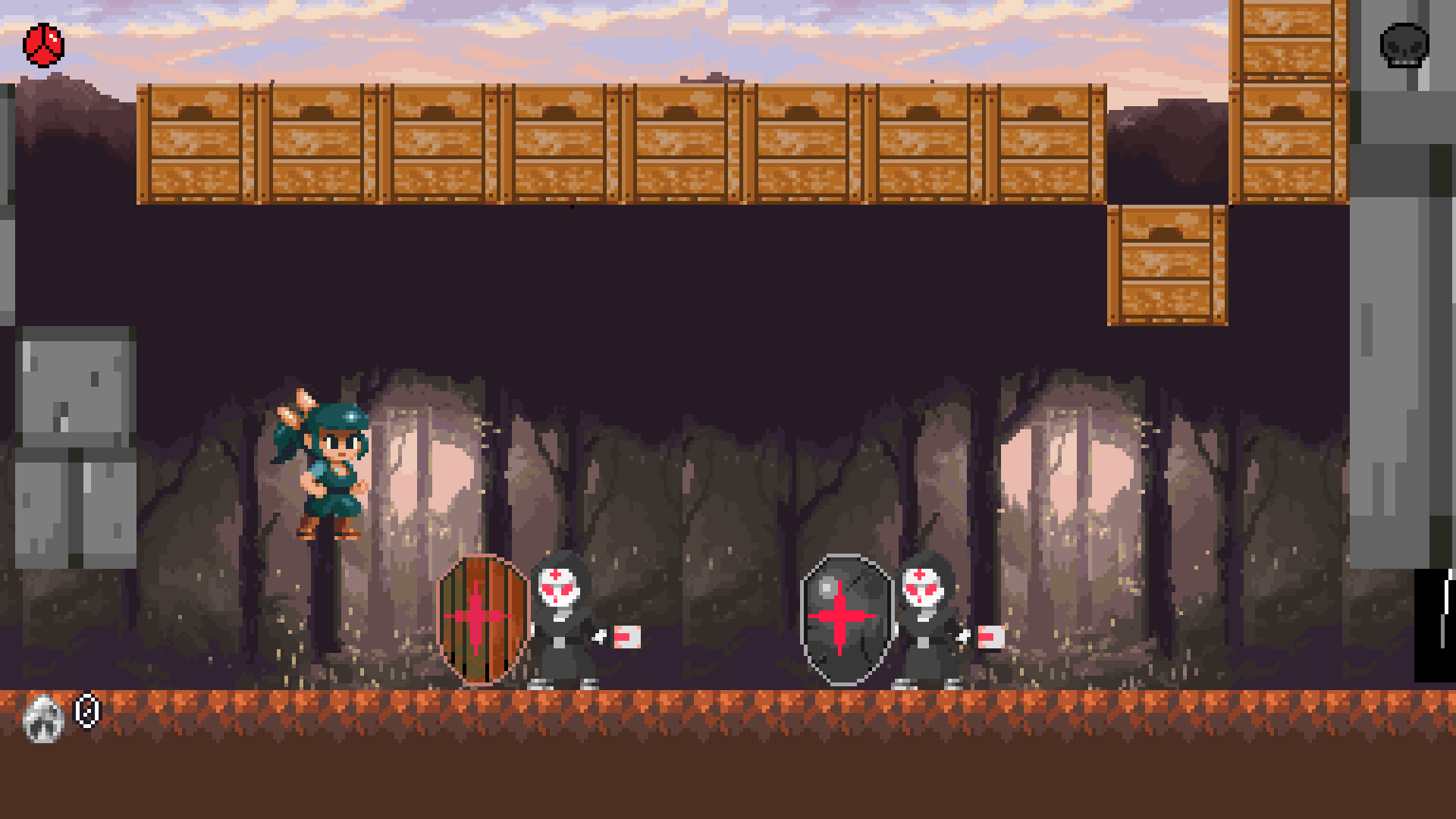 In December 2019, I returned to the project and started making changes. Sunset Witch got a new sprite set and the screen size was doubled. There were many gameplay tweaks being made built around the idea of being a full on Platformer. This was when the game turned a new leaf for me and would look take this form from here onwards.

Before creating a single stage in this new build, I wanted to add things that were fun to play with on their own. Wooden Crates were added in the game, which could be destroyed and platformed on. They became the building blocks of the new levels.

In older builds I noticed that you'd often hold down the shoot button while playing, which over time made gameplay feel repetitive. So I added a Slash Attack to make combat feel more head-on. The Demonic Rabbit Cultists were created hand in hand with the new combat-oriented approach. 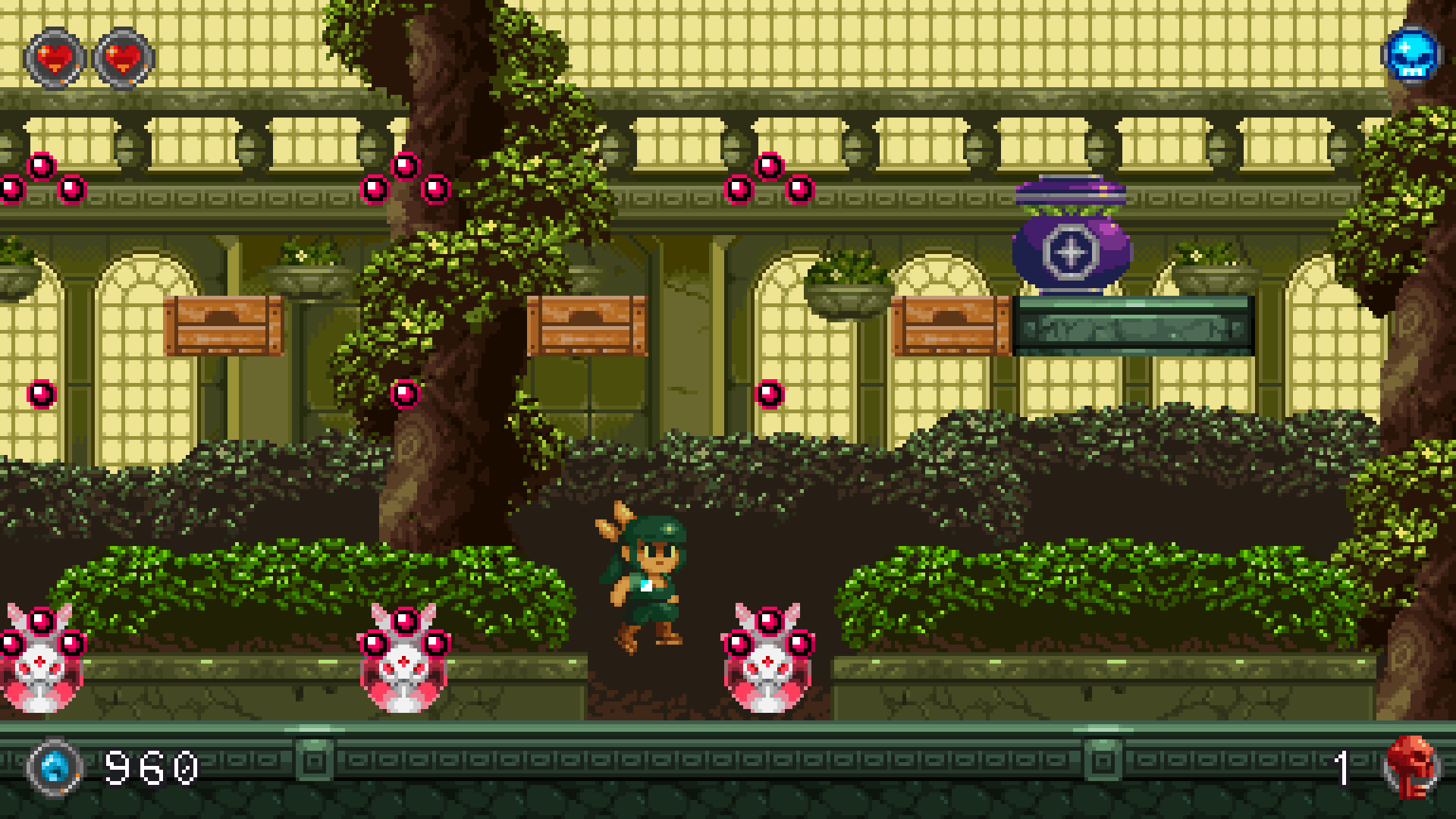 It was in the last two months before October 1st things really started to shape up into what you'll see in the Demo. Many of the environmental details didn't get their final coat of polish until then, several items and the Rabbit Orb enemies weren't added until very recently!

Overall I'm happy with how things shaped up.  After this Demo releases, I will be taking a break from the game to work on smaller scale projects. I'll be taking in feedback on this Demo when it releases, so that I know how to go forward with the game next.

The Sunset Witch Demo will release October 17th 2020. Hope to see you then!