I recently re-discovered multiple design documents and the original script for Fragment. These were made at different points of development, so the differences between this and the original release may vary from major to minor!

Written and illustrated by Angus Beer 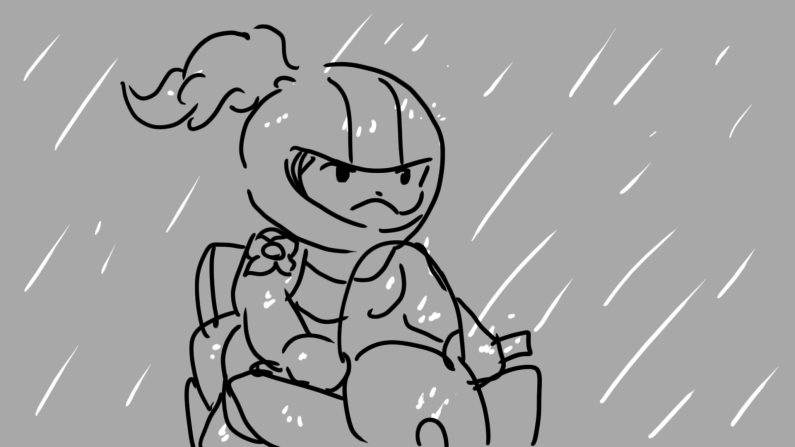 (Fade in from Black)

Rose riding on Motorcycle while it rains

Mystery Man:
That place has been abandoned for years.
There’s a hefty amount of Fragments down there,
but it’s also pretty dangerous.

Rose Ilya:
I understand that. I came prepared.

Rose Rides off into the distance 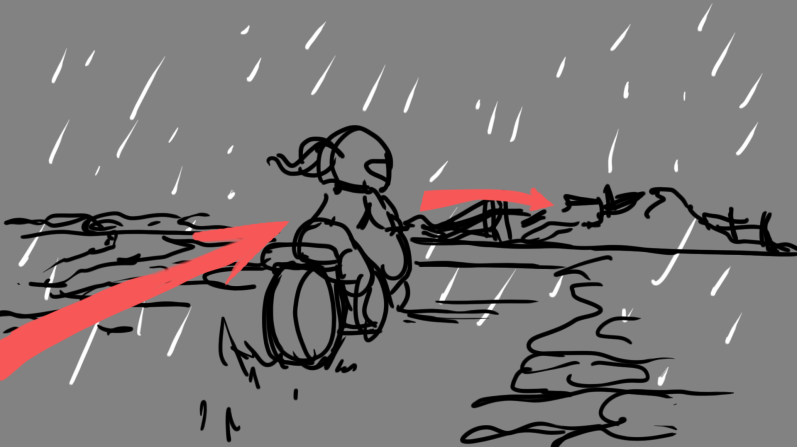 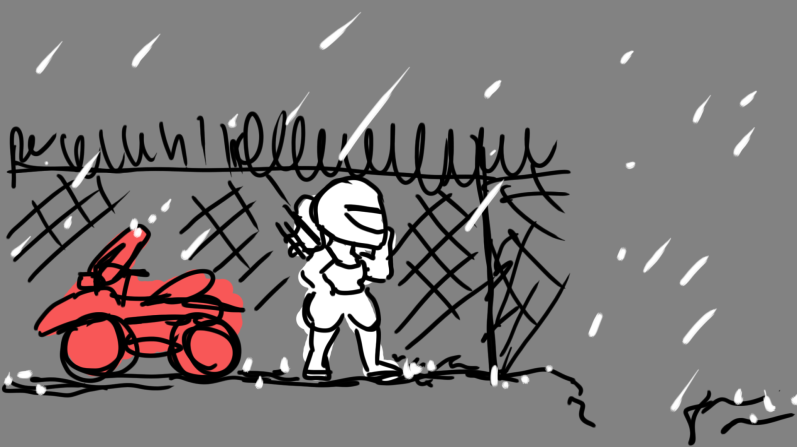 Mystery Man:
So just to recap. Take as many Fragments as you can and bring them to the Fountain.
That will help purify them. Once you do that then you get out of there.

Mystery Man:
And no matter what, DO NOT take your helmet off.
The air down there is infectious. You might turn into one of them.

Rose Ilya:
Don’t worry. I’ll have no need to take this helmet off. 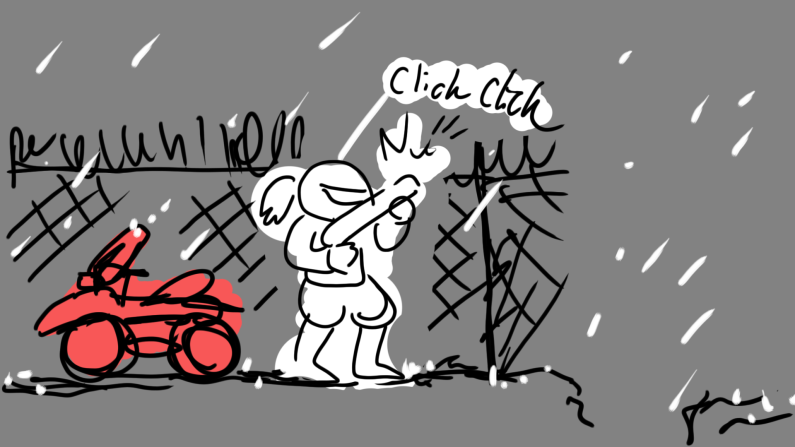 Rose Reloads shotgun and you are given control

A train station huh? This must’ve been how employees got in.

What are all these tanks doing here?

It looks like they use to mine Fragments here.

*Sigh* How does this thing work

What the hell is that?

What is that thing? It’s ginormous! 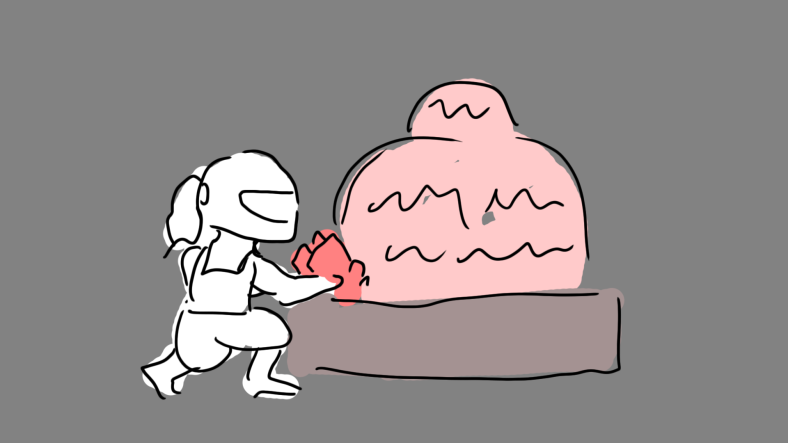 Rose puts the Fragments into the fountain, waits a few seconds and takes them out. 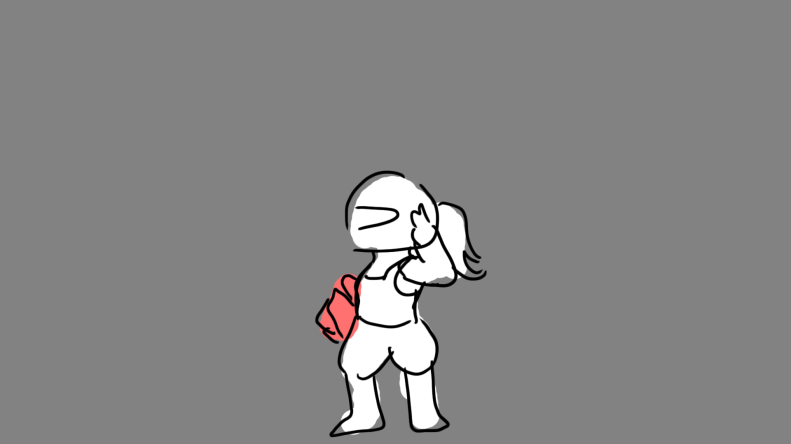 Rose Ilya:
Ok I got the Fragments and purified them. 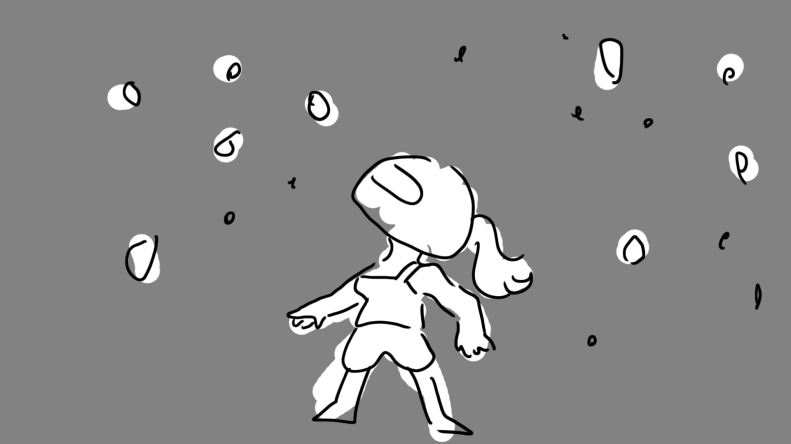 Rose Ilya:
Oh shit! I think the place is falling down!

Mystery Man:
Rose! Get out of there!

Rose Ilya:
I gotta get back to the Entrance! 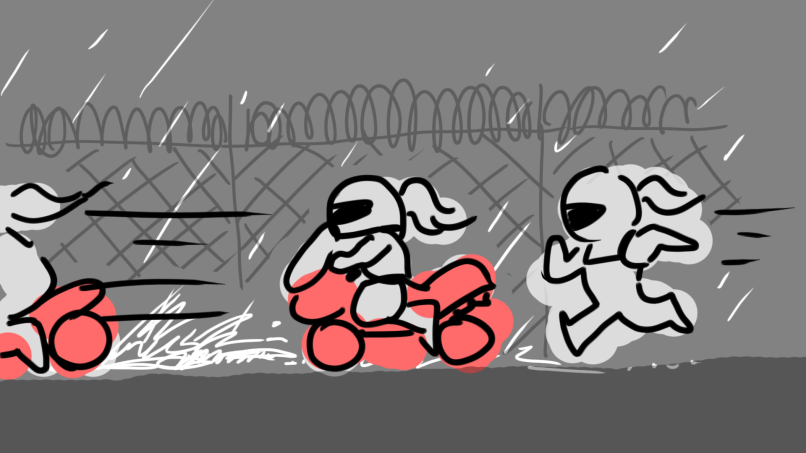 Rose gets on her Motorcycle and speeds off! 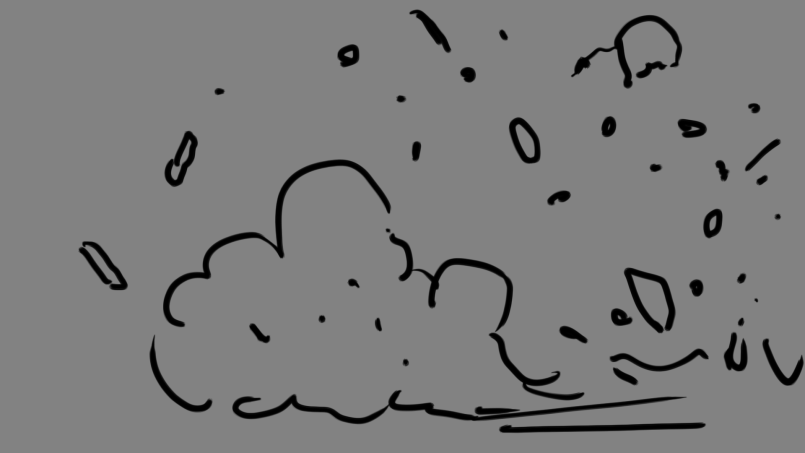 (Fade out to Black)

Rose Ilya:
Phew. I made it out. I’ll be back soon.

Mystery Man:
Well done Rose, you did a fine job! 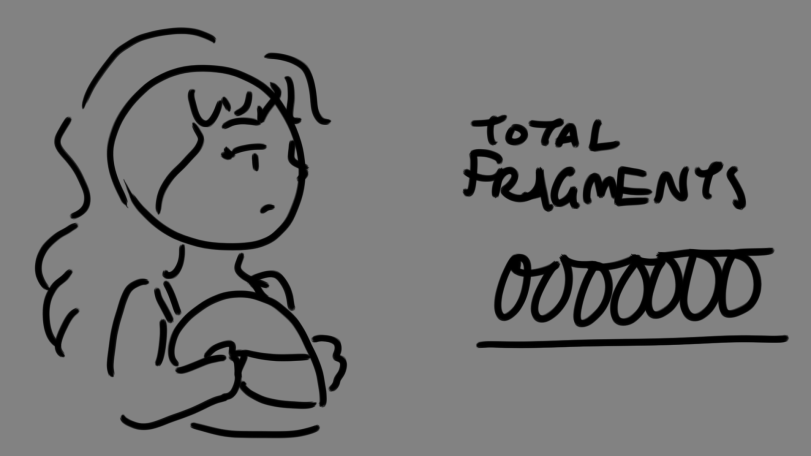 (Fade in from Black)

Player arrives at the entrance to the base. It’s weathered and the front door is open. Military equipment is scattered around the entrance. It's as if they were trying to keep something inside from getting out. 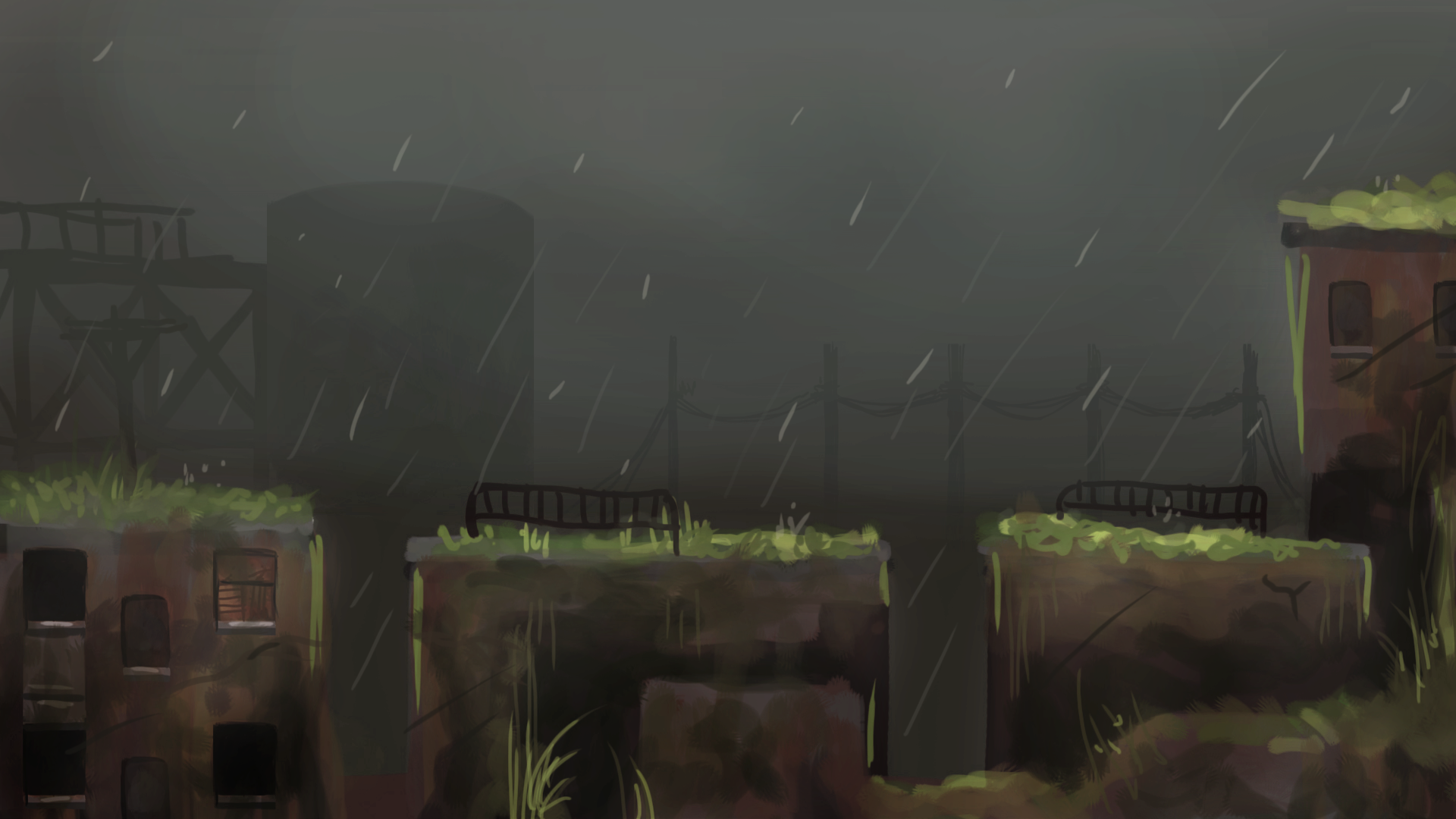 Player enters base, passing several security checkpoints with turrets that descend further into the earth. There are dead bodies scattered around and damage to the corridors. The player eventually comes across a science lab with a creature on an autopsy table. A smashed amniotic tank suggests something escaped and killed the occupants. The player moves into the base proper through a set of airlock doors. 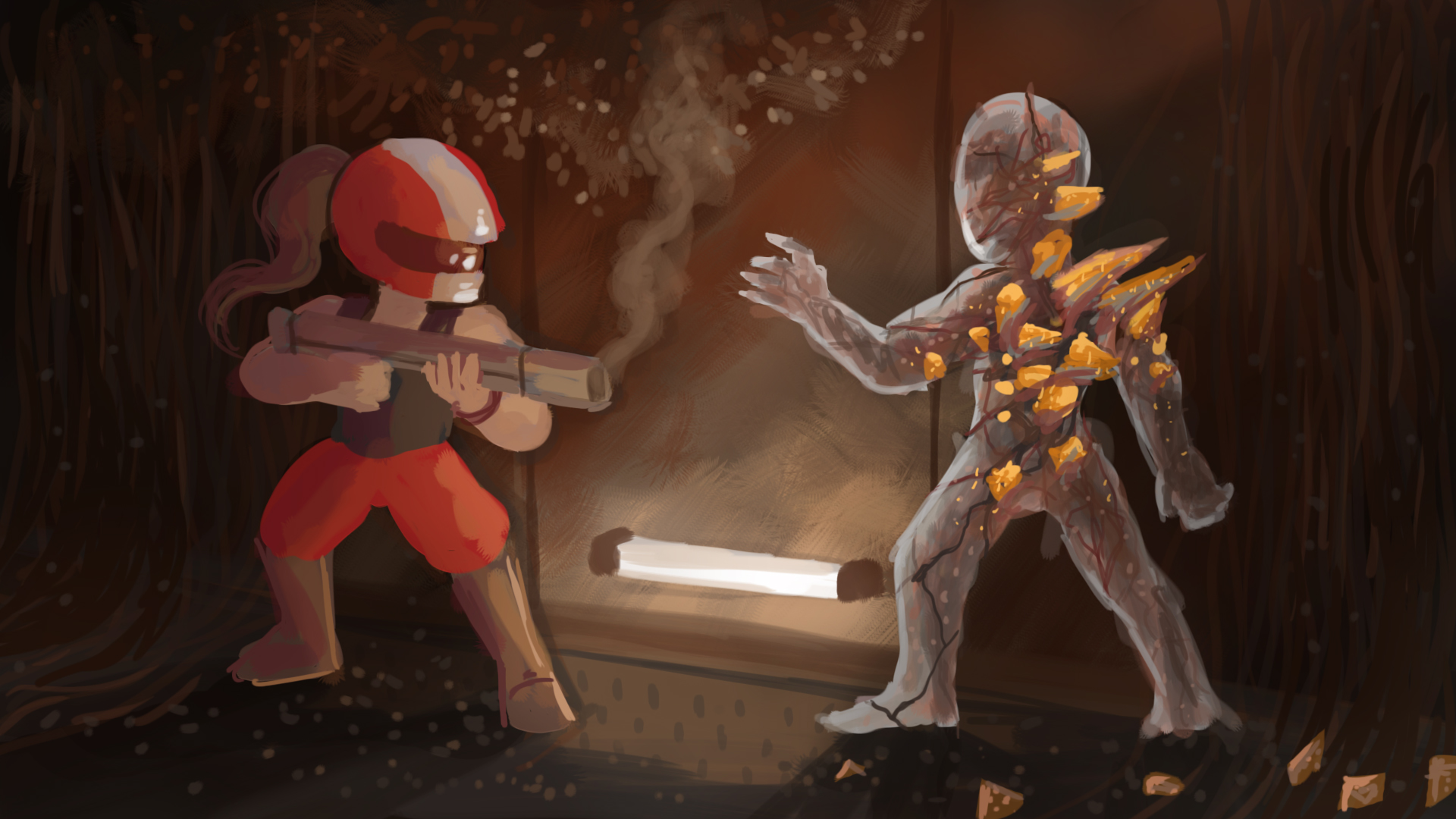 Scene 2: Exploring the Base and Enemy Encounters

The player passes through the airlock and into a long corridor. Here the first sounds of something alive are heard, and the first enemy is sighted. It cries and lunges for the player. It is killed, and the player moves into the Statue room. There is science equipment surrounding the statue, suggesting it was being researched. A missing key indicates that the player cannot interact with it yet.

The player moves on to find a cross road point, a choice between the armoury, the loading bay, and the testing area which is locked.

The loading bay has a security checkpoint at the entrance, and contains more dead bodies and enemies, and a massive armoured train. Loading equipment and cargo crates suggest that material was being transferred out of the base. Damage on the train suggests that the creatures attacked the area and were met with resistance.

The armoury is preceded by another checkpoint, but one that is more fortified than others encountered so far. Once inside, the player discovers a stockpile of military hardware, including several tanks. The way is blocked by shelving and debris. The player enters the tank and pushes past the obstacles to get to the key card at the end. The activation of the tank attracts the creatures that ambush the player. The player kills them and moves back to the cross road. 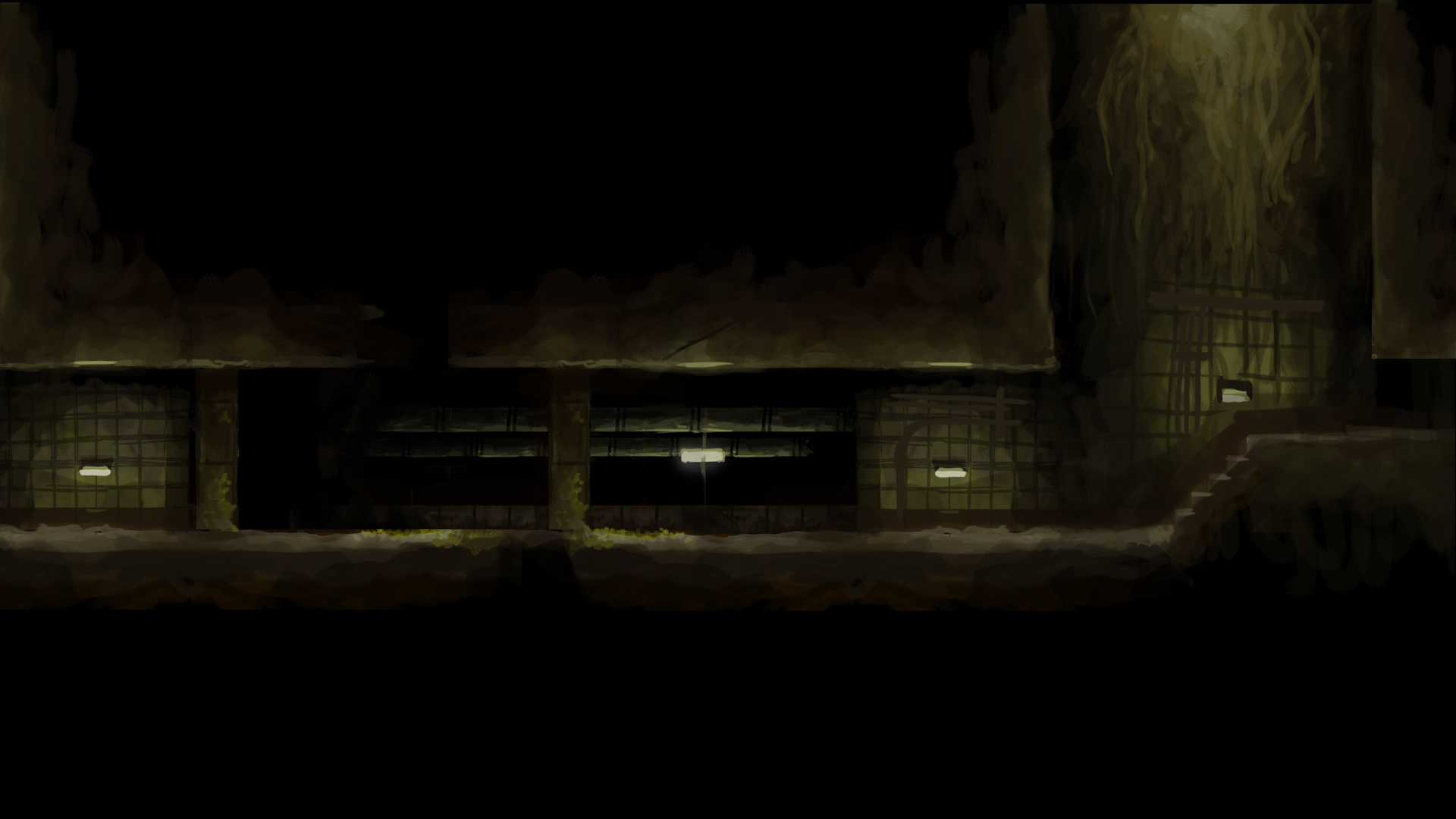 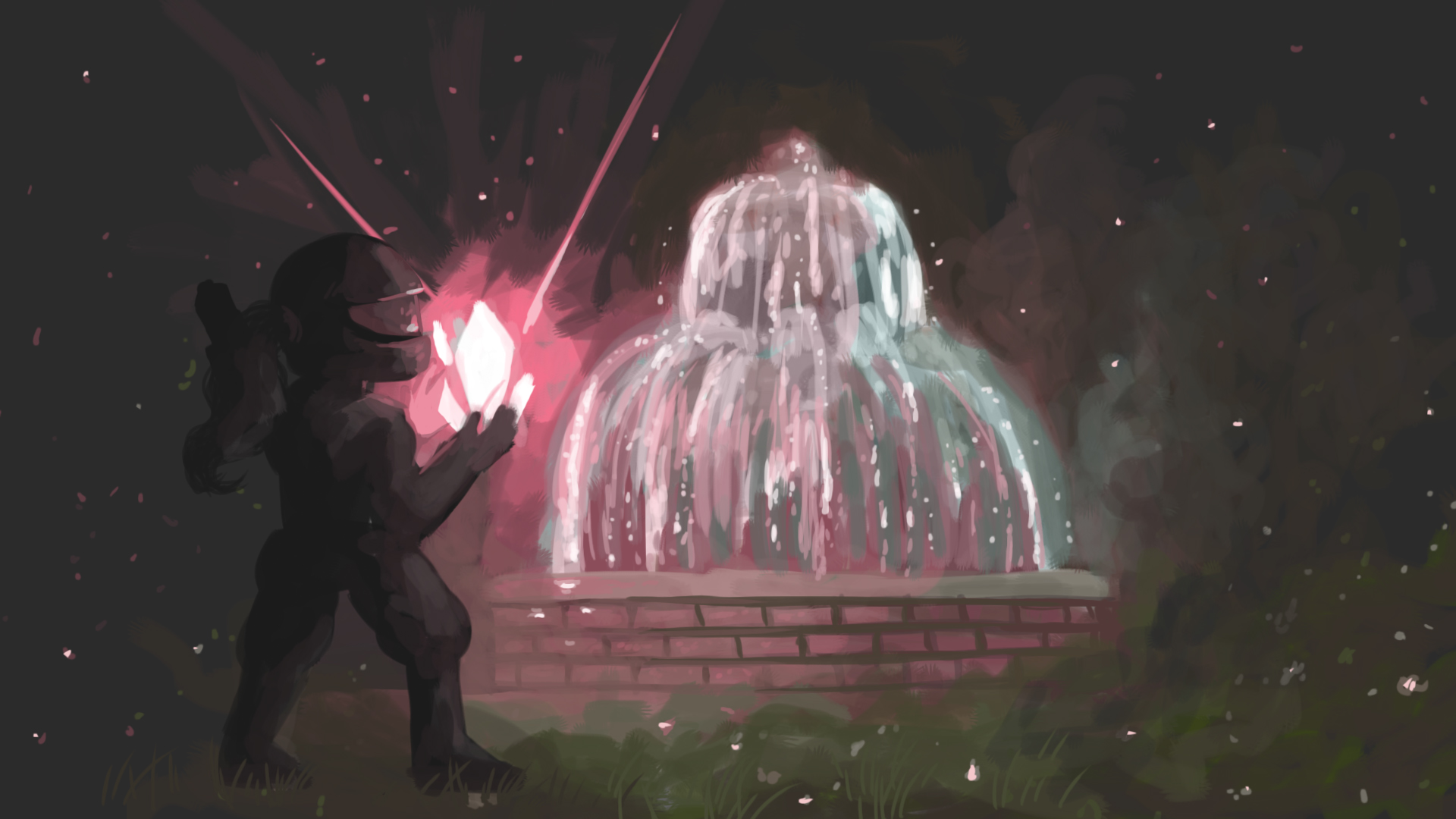 The player uses the key to activate the statue and descends further into the base. Here the player encounters smaller enemies and more bodies as well as a hastily erected checkpoint. Passing this the player finds the Fountain and places the fragments into it.

Violent eruptions rock the base and it starts to crumble and explode. The way the player entered is blocked by rubble, and rushes further into the cave. 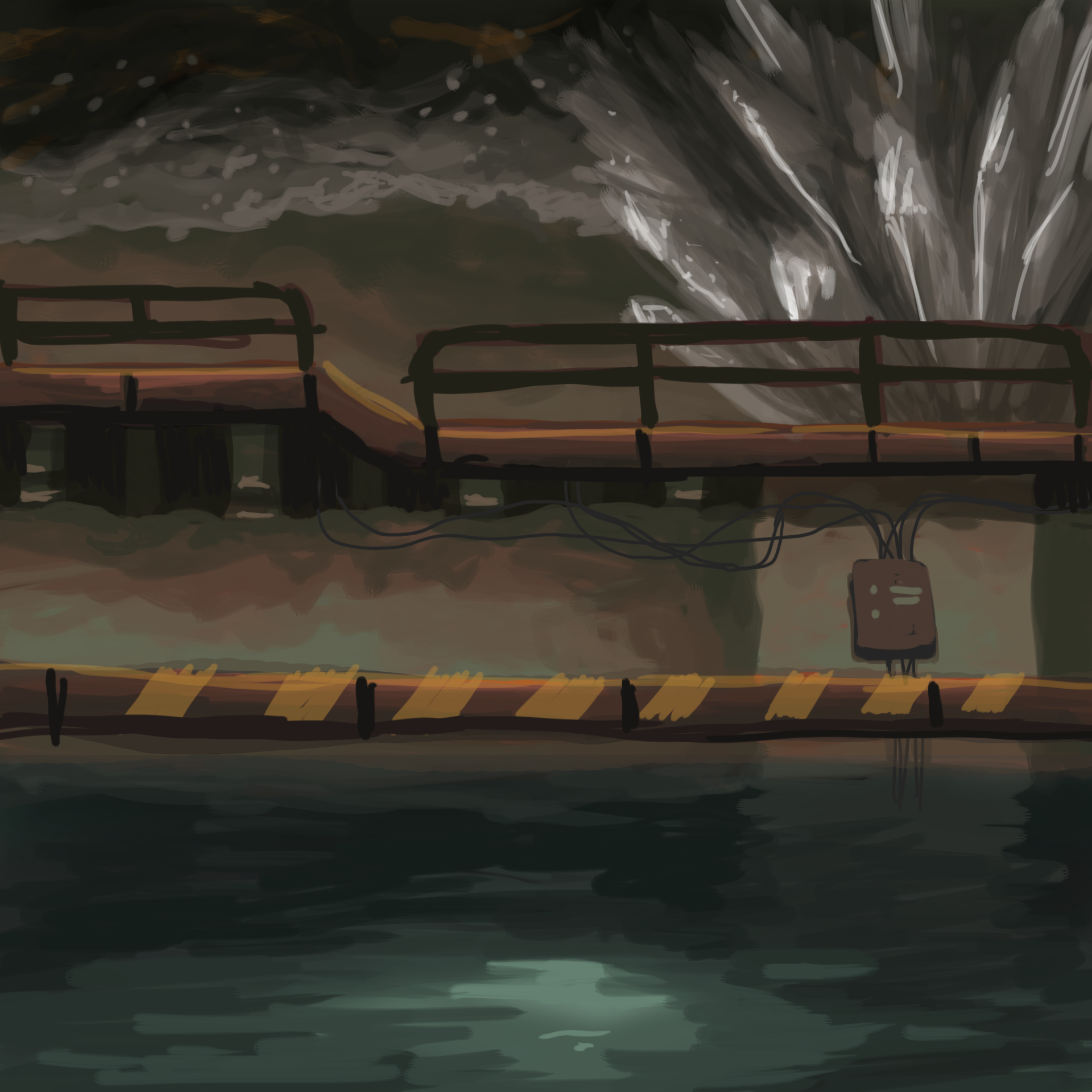 The player rushes to exit the collapsing tunnel, and emerges into the mining tunnels. Excavator machines and carts of fragments are scattered about. More enemies are quickly dispatched as the player is forced to escape from explosions. The player drops through the floor and into another level of the tunnel. An escape tunnel leading up gives the player a route of escape.

The player arrives back at the science lab and dispatches more creatures before moving back to the entrance. The player exits the base just before it is engulfed in fire. Rushing back to the bike the player escapes before the ground collapses.

Written and illustrated by Angus Beer. 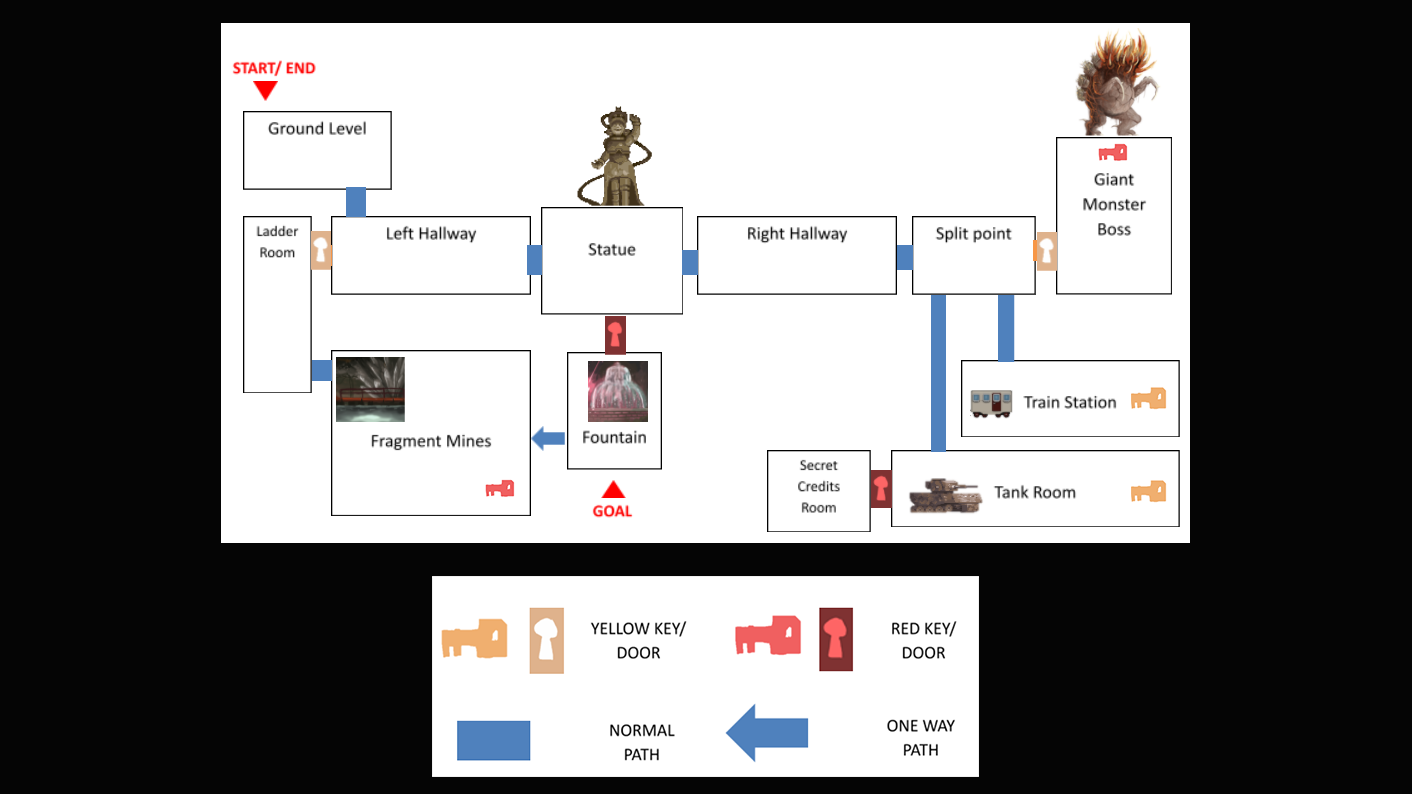 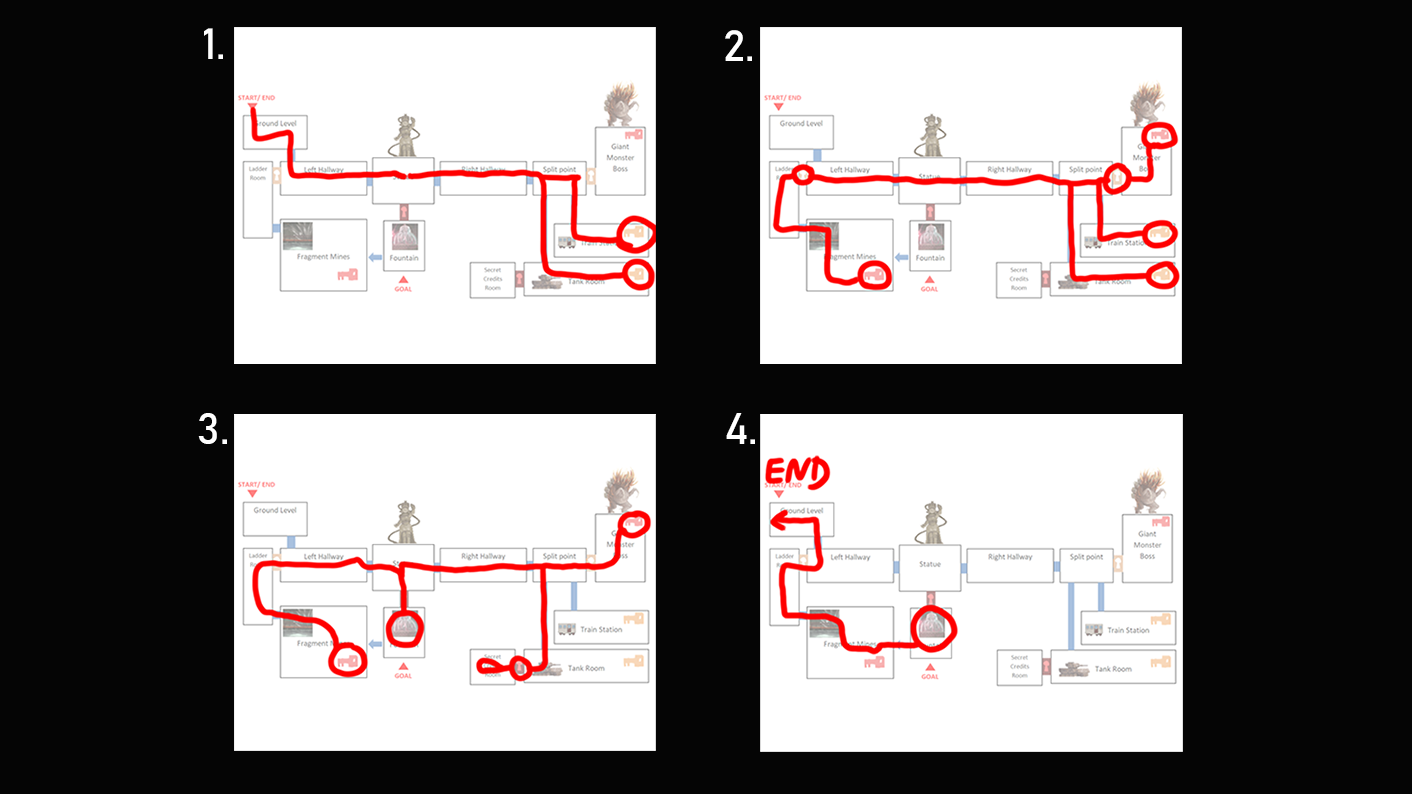